While ASIS is slowly but steadily growing in the UK, across the
Atlantic in New York professional skateboarder Billy
Rohan is also making waves on the grassroots skate scene. 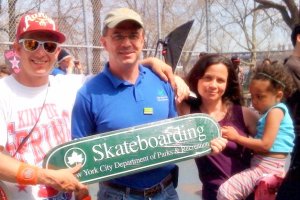 Billy has been named New Yorker of the week by cable TV channel NY1,
thanks to his work generating a new-found interest amongst youths in skateboarding. He’s also been building skateparks around the city so as to host his skate sessions, and using skate equipment donated by his sponsors. and furthermore creating places to do it.

We are happy to see that similar programs are happening in the US where
the situation amongst youths is similar to that in the UK. The need for change is becoming more and more obvious and action sports can provide a solution. Check the video and full story  here.  (seen in NY1.com)